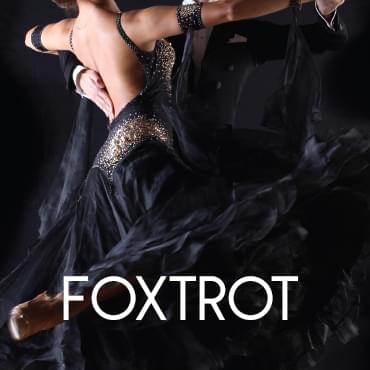 From Vaudeville To The Ballroom

The foxtrot is one of the staples of ballroom dancing. Although there are different stories about its origin, it is commonly thought to have originated in the Summer of 1914 by Vaudeville actor Harry Fox. Fox was performing in a show called Jardin de Danse, on the roof of the New York Theatre. As part of his act, he did “trotting” steps to ragtime music. People began referring to this dance as “Fox’s Trot”. It captured the attention of famed exhibition dancers, Vernon and Irene Castle, who included a variation of it as part of their touring act.

When rock and roll first gained popularity in the early 1950s, record companies were uncertain as to what style of dance would fit this exciting new musical genre. Decca Records initially labeled its rock and roll releases as “foxtrots”, most notably the famous “Rock Around the Clock” by Bill Haley and His Comets.

A Staple of Ballroom Dancing

The steps and form of what we now know as the foxtrot were standardized by Arthur Murray. It is danced primarily to big band music. The foxtrot is a smooth dance characterized by long, flowing movements across the dance floor. In appearance, it is similar to the waltz, although the rhythm is in 4/4 time, instead of the 3/4 time of the waltz.

The popularity of the foxtrot was a significant development in ballroom dancing history. Today, there are many varieties of foxtrot, but they all originated with the dance craze going back to 1914. Our qualified teachers would love to help you learn this fun and versatile dance style. Contact us soon, if you would like to learn more about ballroom dance lessons.